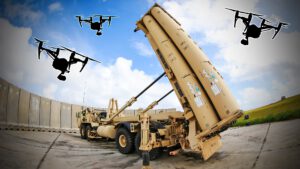 Earlier this year, it came to The War Zone's attention that a series of bizarre and highly concerning events took place in the late Winter of 2019 at Andersen Air Force Base on the Island of Guam. As we understand it, between late February and early March of last year, the massive installation experienced repeated incursions by unmanned aircraft that appeared to be extremely interested in one highly sensitive area of the highly strategic base, the U.S. Army's Terminal High Altitude Area Defense (THAAD) battery that is tasked with defending the island from ballistic missile attacks.

The incursions, which were said to have occurred in late March and early April 2019, had been observed by personnel manning guard towers that loom over the highly secure THAAD area situated towards the northern end of the air base, often referred to as "North West Field." Andersen itself takes up the northern and western reaches of the entire island.

The intruding craft were described as "quadcopter-like" vehicles with bright spotlights that flew from over the water and then across the North West Base area at not much higher than treetop level, about 20 to 30 feet above the ground. On a number of nights, the craft would make multiple incursions in the very early morning hours. They would show up, disappear, then come back a few hours later.

The spotlight that shone down from the craft made it hard for personnel to make out a detailed description of the craft, although estimates range from being three to five feet in diameter largely based on the size of the spotlight. The craft would maneuver dynamically, appearing with the spotlight on, then disappearing, just to reappear moments later over to one side or another with the spotlight on, which was unsettling to those that witnessed it. Supposedly, there was a concerted effort to identify, track, and down the mysterious craft, but it doesn't seem that those efforts were successful based on our understanding of events....

Reported 14 September 2020 on The Warzone: Read the entire article here.

How Department 13 could assist in the management of narcissistic drones in the sky:

Contact Department 13 for more information on effective real-time low altitude airspace situational awareness and protection of your infrastructure and assets.