Fire From the Sky: The Afghan Taliban’s Drones 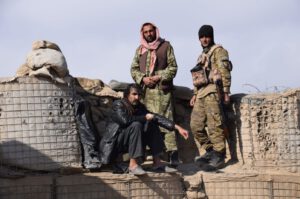 Afghan policemen in Alamgai Market lament that their Taliban foes are better equipped than they themselves (Franz J. Marty, November 21, 2020)

The Taliban have been weaponizing commercially available drones into their arsenal for some time.

SAYED KARAM, PAKTIA, AFGHANISTAN —  While the Taliban have since at least 2016 used camera-equipped commercial drones to film propaganda footage, it was, as far as it could be determined, only in early October 2020 that they began to use such unmanned aerial vehicles for attacks. Although, as of writing, there have been few such attacks with weaponized commercial drones, they are significant for several reasons. They exemplify that the Taliban remain — despite engaging the Afghan government and other Afghan stakeholders in peace negotiations — intent on fighting the Afghan government and employ new, ingenious tactics to do so. Furthermore, and even though the impact of such drone attacks has so far remained limited, they threaten to demoralize Afghan government forces who perceive themselves to face a better-equipped enemy.

Another policeman from the district centre of Sayed Karam claimed that in some instances, Taliban drones had dropped improvised bomblets made out of plastic Pepsi bottles filled with explosives and closed with a trigger in the bottleneck. And a video that was later shared on Twitter and allegedly taken in Khost, a province neighbouring Paktia, showed a 40 mm M433 high-explosive dual-purpose grenade cartridge that is usually meant to be shot with a grenade launcher but was apparently modified to be triggered on impact when dropped from a drone.