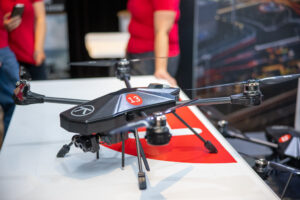 Department 13 has been hand-picked to demonstrate the superiority of its world-leading drone and counter-drone technology in front of some of the most powerful minds within Australia’s military and defence industries. Internationally renowned for its cutting-edge drone systems and solutions, Department 13 is among a select group of autonomous system makers to take part in the invitation-only Army Robotics Exposition in Brisbane this month.

Chief executive Lee Croft said the showcase would give Department 13 the opportunity to demonstrate its leading MESMER counter-drone technology, which can be integrated into almost any military hardware to provide force protection, and also demonstrate how DIAL technologies can help protect sensitive sites for the Australian Army and the Australian Defence Force.

“This is an incredible opportunity to show the Australian Army and the wider industry’s most influential decisionmakers first-hand just how far Department13 has pushed drone technology since we last worked with them and what our systems can do to keep both our military personnel and defence infrastructure and assets safe and secure,” Mr Croft said.

“Autonomous solutions for the defence industry have come a long way in a few short years and as a world pioneer, Department 13 is honoured to have been invited and is keen to show exposition delegates the monumental leaps our team has made and why we are regarded as a world leader.”

Department 13’s patented MESMER system is ideally designed for military applications and is already being used by defence forces and governments around the world to protect military assets and personnel.

It has been developed to detect unauthorised drone activities within a secured perimeter. It is able to identify the invader, apply appropriate strategies to inhibit the threat and issue real-time alerts to systems or staff. Its superior protocol technology can also take control of a target drone or controller, either automatically or on the operator’s command.

The company’s DIAL sensors can add another level of protection for defence services by listening for the radio frequency signature of drones that enter an area of operation and use a growing library of drone fingerprints to detect a threat and send alerts.

Together with long-term partner Nightingale Security, Department 13 will also show off fully autonomous drone systems that can operate in rain, snow and dust storms to respond automatically to detected drones threats.

“Our DIAL system incorporated within Nightingale’s technology creates a platform solution that is ideally suited to military uses and we’re excited to show the Australian Army what it can do and just how it can be deployed.”

The exposition invitation marks yet another milestone for the Australian drone technology company, which was founded in the US more than a decade ago, since it re-launched last year to service Australian government, private and public sector enterprises.

“We are no longer primarily based in the US as the Australian head office is now firmly established,” he said.

“Our Australian clients are now starting to see the results of what our systems can do and the extraordinary level of protection they provide for their businesses.

“We’re looking forward to showing the Australian Army and the defence community why we have become a supplier of choice for drone technology and solutions around the globe, and how Department 13 can play a vital, ongoing role in enhancing our national defence. Many of our staff are also ex-defence and this plays an integral role in the development and delivery of our products”.

The Army Robotics Exposition has been organised by the Defence Innovation Network to demonstrate autonomous system concepts and technologies. Defence personnel, including capability manager delegates, will be able to view available technologies and innovations which may be applied to the future operating environments.